As the students begin to file in to the auditorium. I begin to do Overtone Singing, African Yodeling and Throat Whistling accompanied by a large frame drum. As you listen notice how naturally they begin to join in and quiet down. By the end of the piece you can hear a pin drop.

Also called Throat Singing, overtone singing is a vocal technique that originates from Central Asia, particularly the countries of Tuva and Mongolia. 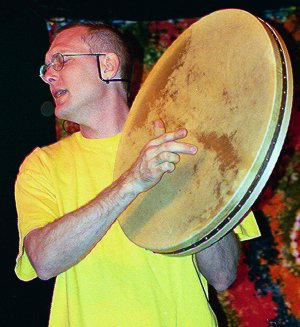 Paul Winter Consort. I also found a great book called “Tuva or Bust” which was about physicist Richard Feynman’s

attempts with his friend Ralph to get travel visas to the then forbidden Republic of Tuva which was part of the old Soviet Union.

I like to start my concerts with overtone singing running the vocals through a digital delay.

I also added something that to my knowledge, no one else does and that is Throat Whistling. Which is literally a whistle I create from deep in my throat. I can get 3 distinct notes at this point…

The other vocal element is African style yodeling…

I’m also playing the Siberian Shaman Drum as well as “Bob The Big Drum”, a huge log drum I carved out of a Sycamore tree.